The 1st steam fire engine arrived in Lafayette in 1863. Back in 1840, John Ericsson built the 1st American steam-powered fire engine. And then sometime in the 1850s steam fire engines started making their way to the Midwest. On October 14, 1859 the Evansville City Council approved the purchase of a steam engine. And then on October 17 of that same year, the Lafayette Daily Courier reported on the test of a steam engine in Indianapolis. The test went well and the engine got up steam in 9 minutes and threw water for about an hour. On the 19th of that month, the same engine arrived in Lafayette for a demonstration. According to the Lafayette Daily Journal, this steam engine was 11 feet long, 5.5 feet wide and weighed 5,300 pounds. It was so heavy that it caused the floor of the engine house to sink about an inch. 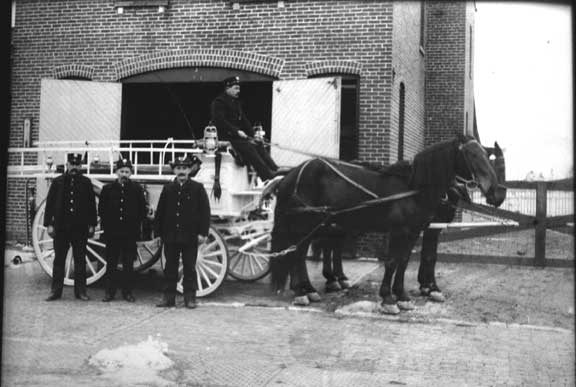 Trial
The trial took place on October 20th at the old packet landing near the food of Ferry Street. It took 26 men and boys to drag the machine to the canal. A man named Tom Underwood took it upon himself to get fuel for the machine. And soon enough, black smoke belched out of the chimney as the fuel was lighted and in 9 minutes and 30 seconds, the engine was throwing water.

Four Experiments
The machine was put through 4 different experiments. The 1st was with a single pipe, a 1 inch nozzle, and 1 section of hose. The steam engine propelled the water 200 feet with a good stream and steady volume. In the 2nd experiment, a 2nd length of hose and pipe (equal to the 1st) was attached to the engine. Mr. Underwood did not believe that the machine could throw water with 2 sections of hose, so he took a position 125 feet away from the nozzles. When the water was turned on, it went a distance of 150 feet. According to the Daily Journal, Mr. Underwood "...soon had a realizing sense of the meaning "baptize", and prudently retired to change his linen."

With the 3rd experiment, both sections of hose were attached so they measured how much pressure they could obtain with the engine. It threw water 200 feet at a pressure of 120 Pounds per Square Inch (PSI), which wasn't bad at all. In the 4th and final experiment, they took 400 feet of their "new leather hose" and stretched it to "Purdue's block". The gauge on the engine read between 90 and 100 pounds, and threw water 160 feet.

Purchasing a Steam Engine
The trial impressed the city officials, and finally after much debate and discussion, the City Council passed an ordinance for the issue of script to purchase a steam engine for the City of Lafayette on November 17, 1862. The final ordinance was for $10,000 in bonds for the purpose of purchasing a steam fire engine. The bonds were to be issued in the amounts of 5, 10, 15, 25 and 50 cent amounts. These bonds were also refundable for payment of city taxes.

T.T. Benbridge
The new steam engine arrived in Lafayette on October 13, 1863. In those days it was traditional to name the fire engines after someone or something of importance to that particular city. It was suggested that the new engine be named after a member of "...the City Council whose life-long labors in the Fire Department had fairly earned the honor...". It was eventually decided that the name would be T.T. Benbridge.
Community Outreach
Fire Stations
Forms & Applications
History
Photo Gallery