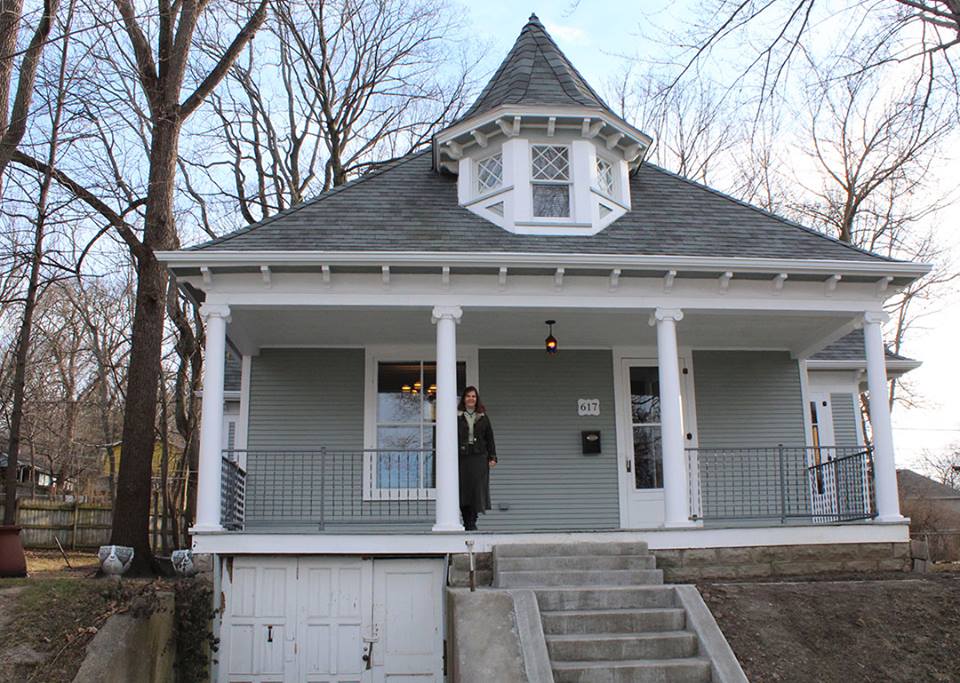 In the fall of 2015, Dr. Angelica Kokkalis, a local doctor of Traditional Chinese Medicine originally from Greece, fell in love on New York Street in Lafayette. The center of her affection was a 2-story, dilapidated home in the historic Ellsworth Neighborhood. The house was marked for demolition, but neighbors rallied to save it in hopes someone would come along and return the home to its former glory. Angelica quickly put her fears of home renovation aside and embraced what she considered the opportunity of a lifetime. Her goal, to save a historic home and in doing so, help revitalize an area of Lafayette that needed some love. Angelica's father had been a home builder so she grew up knowing all about the process, however, until now, she had only been an observer, focused mostly on interior design with her own homes. But it would take many months to get to the decorating phase of her newest endeavor.

The historic house on New York Street was in bad shape. Sky could be seen through holes in the roof, walls and floors were heavily damaged by water and the porch was falling apart. It was obvious the property had been exposed to decades of damage and neglect. But it had good bones and a story to tell and that was all Angelica needed to inspire her. Well that, and a lot of volunteers who quickly became friends; ready, willing and able to make the house a home again. As things progressed, the enormity of a historic home renovation became clear, but Angelica was determined to stay true to the home's historic architecture. Everything that was found, was salvaged and reused in the reno. Original floors, framing, pocket doors and more were refurbished and given a new start. A home that was once lost in time was ticking again. Everyone working on the house, from the professionals to the volunteers, were slowly breathing life back into a local landmark.

Cornerstone Design architect Dan Kaisser stepped up early by providing blue prints for the century-old house and in doing so discovered that the 1902 structure was designed by the same architect that did the courthouse in downtown Lafayette. Other volunteers included neighbor Sam Bovio, who helped unearth the house's true potential and assisted with the restoration. Carpenter Ben Goodman and electrician Walter Wilkins, with help from his father-in-law Paul and Tim Keesee, as well as plumber Dennis Mitton, saw the restoration through to its completion. Local philanthropist Don Stein was able to provide a variety of historic decor to make each room special. Well-known designers, Jim Smith and Jim Mailloux, worked extensively to locate era-specific accents and furniture to use throughout the home and ensure every detail was authentic. The Wabash Valley Historic Trust helped recruit volunteers and provided a valuable network of historic renovation experts. Finally, many other passionate community members helped finish the majority of the grunt work. It took a lot of people and a lot of hard work, but never once during the process did Angelica think of giving up on the house or the neighborhood.

617 New York Street continues to be a work in process of course, most historic homes always are. On most nights you will still find Angelica in the basement, knee deep in concrete, reinforcing the old walls. Walls full of history and hope. Walls that have become a home for her son, Dennis Lyrintzis, as he graduates from Purdue in May and starts his life in Lafayette as a stock market analyst for Golden Sail investment company. Walls that provide feelings of accomplishment and pride for all of those involved in the restoration.

The city came across Angelica's efforts through the new BOCA code enforcement program. Angelica is a shining example of what a little love and a lot of hard work can do to transform a neighborhood. Lafayette is fortunate to have many historic homes, all with a tale to tell, just waiting to be discovered. We thank Angelica and her team for coming together to revitalize Ellsworth, and we proudly recognize all of the other local advocates dedicated to making sure the story of Lafayette's history lives on.