What is the Emerald Ash Borer?

The borer is an exotic beetle that was discovered in southeastern Michigan near Detroit in the summer of 2002. The larvae (immature stage) feed on the inner bark of ash trees, disrupting the tree’s ability to transport water and nutrients. The insect probably arrived in the United States on solid wood packing material carried in cargo ships or airplanes originating in Asia.

The City of Lafayette is in its 6th year of infestation. According to Purdue University experts, we are on the downhill ‘slide’ of the infestation but may experience peaks and valleys of infected trees as the insect moves on to new geographic locations. In 2016 we will attempt to treat some of the public trees that haven’t succumbed to the borer. Unfortunately, because the majority of the trees have not been treated they died and will be removed over the next several years.

What to do if you have an ash tree you think is still alive.

What if there is a dead ash tree on my street and I think it might fall?

If you think you have a dead ash tree on your street that is a public tree (planted between the sidewalk and the street) contact the city forester to schedule an assessment. Due to the high volume of dead ash trees, the busiest streets—our storm removal and emergency routes—will be attended to first but it is important that potentially dangerous trees be brought to the attention of the city.

To learn more about the Emerald Ash Borer: 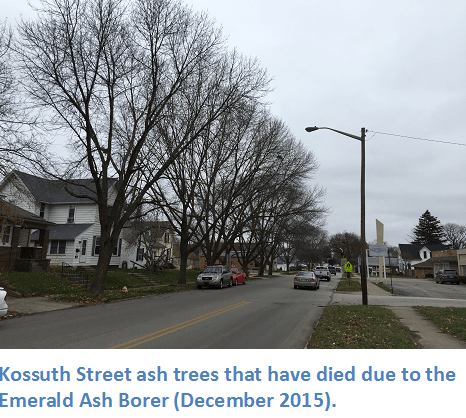 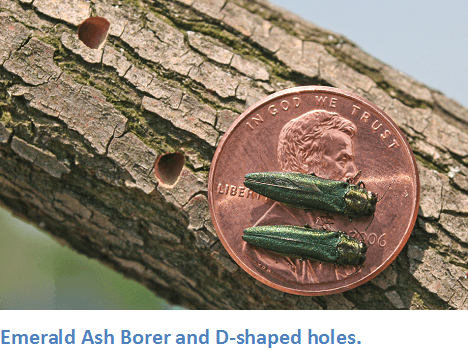